The Australian Frontier Wars March began on Anzac Day, 25 April 2011, at the instigation of Ghillar Michael Anderson, head of state of the Eualyhi Nation and last surviving founder of the Aboriginal Embassy in Australia’s national capital, Canberra.

Every Anzac Day since 2011, marchers have assembled at the foot of Anzac Parade leading to the Australian War Memorial (AWM). Participants have commemorated those Aboriginal and Torres Strait Islander people who gave their lives defending their homelands from the incursions of British and other colonists from 1788, when the First Fleet arrived in what we now call Sydney. Although not permitted to join Anzac Day veterans commemorating the fallen of overseas wars in which Australians have participated, Frontier Wars marchers hope that one day the AWM and Australians generally will accept colonial frontier conflicts as befitting official recognition as part of Australia’s war history.

Marchers are not alone in this belief. For some years, as far back as 1998 or earlier, First Peoples, academics, journalists and others have been calling for the Australian War Memorial to recognise colonial frontier conflicts as part of Australia’s military history. Historian Henry Reynolds, in his book, Truth-Telling: History, sovereignty and the Uluru Statement, published in February 2021, explains why the Australian War Memorial must acknowledge the frontier wars, why Australia should change the date of its national day, and why treaties with First Nations are so important.

Marchers, who took part in the 2022 Frontier Wars March, were not allowed to begin their way to the relocated Stone of Remembrance at the Australian War Memorial (AWM) until most members of the public had already left the area. Some members of the public still mistakenly believe that the marchers are “protesters”. For more than 10 years, Aboriginal and Torres Strait Islander families and supporters have joined the Frontier Wars March on Anzac Day to commemorate First Nations people who gave their lives in the defence of Country in the colonial period from 1788 to at least the 1940s. 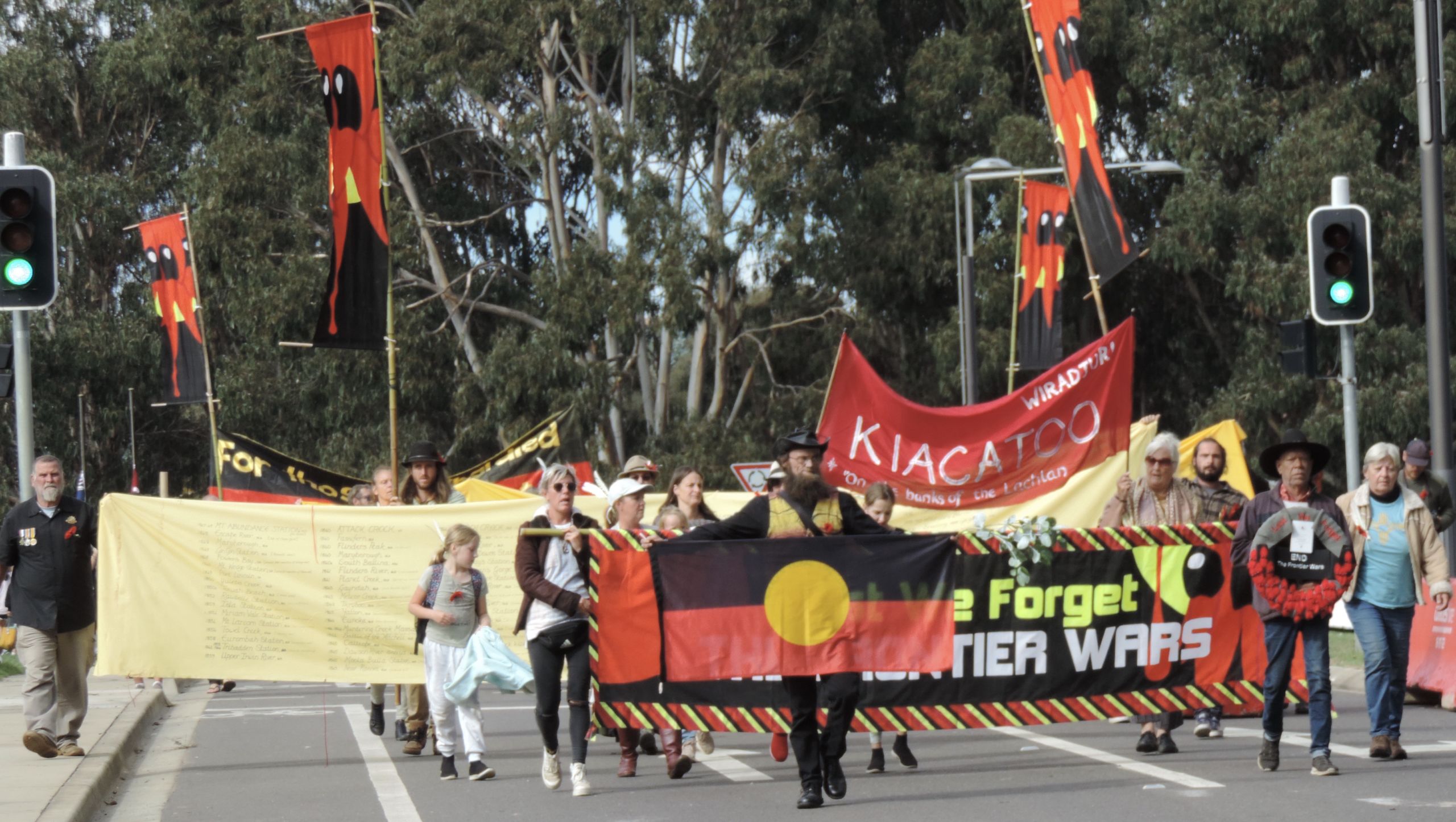 While the AWM is undergoing expensive and controversial renovations, due to be completed in 2024, Anzac Day services have been moved to the Sculpture Garden in the Western grounds of the AWM precinct. Anzac Day 2022 in Australia’s National Capital was officially commemorated with a Dawn Service, a Commemoration Ceremony for Aboriginal and Torres Strait Islander people who have served in the defence of Australia, a march for veterans and serving members of the Australian forces and an address by the Governor-General, His Excellency General the Honourable David Hurley AC DSC (Retd).

While the public, estimated to be about 20,000, were allowed to view the 9.30 am parade of veterans and serving personnel, organised by the Returned and Services League of Australia (ACT Branch), family members, including children, and members of the public were not permitted to participate in the march itself. The event was shown on large screens for those who could not find a spot behind fences erected along the route of the event. The public were, however, allowed to lay a tribute or wreaths at the Stone of Remembrance, now located temporarily in the Captain Reg Saunders Courtyard, after the Dawn Service or throughout the day.

Tenth Anniversary of the Frontier Wars March, Anzac Day, Canberra, Australia’s National Capital, 25 April 2021
A small group of valiant marchers made their way up Anzac Parade, Canberra, where, after the very restricted National Anzac Day Ceremony, they were allowed to lay a wreath commemorating those who gave their lives in the defence of Country.

Owing to the Coronavrus outbreak, annual Anzac Day ceremonies did not take place around Australia other than a private ceremony held at the Australian War Memorial, Canberra. This private ceremony, not open to the public, was broadcast from 5.30 am on 25 April 2020.

Rachel Hocking and John Paul Janke, co-hosts of NITV’s ‘The Point’, explored the history of the frontier wars on 19 April 2018. Watch the videos at: https://www.sbs.com.au/nitv/article/2018/04/18/nitvs-point-explores-history-australias-frontier-wars

For Ghillar Michael Anderson veterans’ acceptance of the Frontier Wars March in 2018 was a major turning point in the quest to have frontier conflicts included in Australia’s military history at the Australian War Memorial. Read Mr Anderson’s media statement on the 2018 march:
‘Veterans’ Acceptance of the Frontier Wars March–A Turning Point’:
https://nationalunitygovernment.org/content/veterans-acceptance-frontier-wars-march-turning-point

Anderson, last surviving founder, on 25 January 1972, of the Aboriginal Embassy on the lawns opposite the former Old Parliament House (now the Museum of Australian Democracy), issued an invitation to join the eighth Frontier Wars March on 25 April 2018. Details on this website under ‘News‘: https://australianfrontierconflicts.com.au/reminder-frontier-wars-march-anzac-parade-canberra-anzac-day-25-april-2018/

Aboriginal Embassy Camp
A storytelling camp and other activities about the frontier wars has been held on a number of occasions at the Aboriginal Embassy, King George Terrace, Parkes, Canberra, in the lead-up to Anzac Day. See ‘News’ on the 2018 event on this website at:
https://australianfrontierconflicts.com.au/aboriginal-tent-embassy-camp-shines-light-on-frontier-wars/

Videos of 2011–2016 Frontier Wars Marches
The Frontier Wars March began in 2011 at the instigation of Ghillar Michael Anderson. Independent filmmaker, Eleanor Gilbert of Enlightning Productions, has recorded the frontier wars marches over the years they have been held. You can view her video of the marches to 2016, Moving Truth, at:
https://vimeo.com/214091130

While Aboriginal and Torres Strait Islander Peoples are now recognised for their war service in overseas conflicts, the Australian War Memorial does not officially recognise First Nations peoples’ defence of their homelands in the colonial period. The AWM’s official position is that the Frontier Wars should be recognised, but that their history is better covered by other institutions like the National Museum of Australia (NMA). (See Other Gallery and Museum Coverage of Conflicts on the Australian Frontier below). Marylou Pooley’s article of 17 December 2013, ‘Will the Australian War Memorial tell the story of colonial conflicts?’ is still on the AWM’s website: https://www.awm.gov.au/articles/blog/response-question-about-frontier-conflicts

For Country for Nation Exhibition, Australian War Memorial (AWM)
The theme of the Australian War Memorial’s For Country, for Nation exhibition (details at: https://www.awm.gov.au/visit/exhibitions/for-country-for-nation), held in Canberra from 23 September 2016 to 13 September 2017, is ‘Defending country–Indigenous Service’ in Australia’s Army, Navy and Airforce. The touring exhibition was held at Geraldton Regional Art Gallery, Western Australia from 19 December 2020 to 31 January 2021, and at Wanneroo, Western Australia from 13 February to 28 March 2021. For Country for Nation opened at the Queen Victoria Museum and Art Gallery, Launceston, Tasmania on 17 April 2021 and will be on show until 11 July 2021. More information and other past venues: https://www.awm.gov.au/visit/exhibitions/for-country-for-nation

Wartime article
As part of its Indigenous service theme, the AWM’s official magazine, Wartime, ran an article, ‘The Fighting Gunditjmara’, by Lachlan Grant, in the Spring 2016 issue. This article is available on academia.edu at:
https://www.academia.edu/2880659/The_fighting_Gunditjmara_Indigenous_people_have_fought_for_country_and_for_nation_from_frontier_wars_to_world_wars

In the story, Grant refers to the conflicts that arose between Europeans and Aboriginal people in the Portland area of Victoria in the 1830s. He quotes Gunditjmara man and Australia’s first Aboriginal Army officer, the late Captain Reg Saunders:

I would have fought the war my forefathers fought [on Aboriginal Country in Victoria] because I think we were right. We were fighting for survival and that has always been a justification for war. (Wartime, Spring Issue, 2016, pp. 18–24)

Paintings of massacres included in exhibition

In the For Country For Nation exhibition in Canberra, the AWM included two paintings of massacres that took place in Western Australia: Queenie McKenzie’s Horso Creek killings and Rover Thomas’s Ruby Plains Massacre 1. The intention of these works, and others like them, are Aboriginal historical records of events that occurred and have been handed down through the oral tradition, but not necessarily recorded in government archives. Queenie McKenzie’s painting depicts an 1880s incident in which colonists shot a group of Gija people for driving away bullocks. To hide the evidence of the murders, the Gija people’s bodies were burnt. The mother of a boy who survived the massacre found him hiding in the carcass of a bullock. Rover Thomas’s painting is one of a series he created to record ‘the killing times’ in the East Kimberleys, Western Australia from the 1880s to the 1920s.