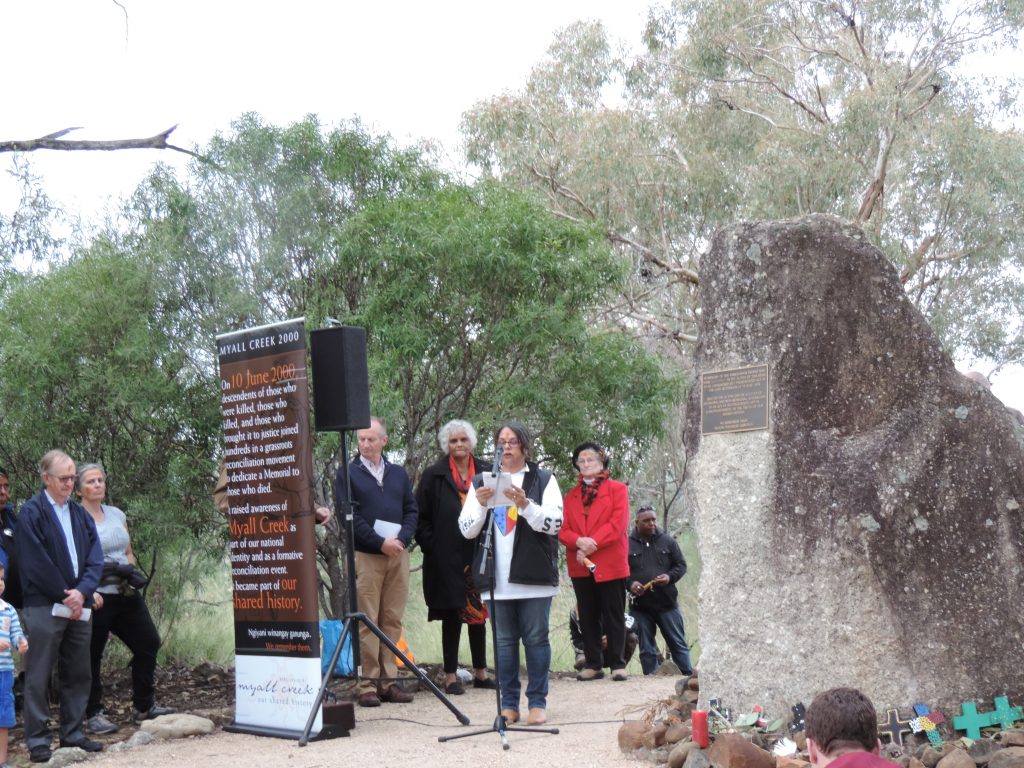 Although there are some memorials to conflicts that took place on the Australian frontier and to the people who were involved in them, the majority of the people who took part and the places where confrontations, killings and massacres took place, are not recognised. Compared to the many war memorials across the country, dedicated to the fallen in wars in which Australians have participated overseas, the lack of memorials to frontier conflict is a very sad indictment of the level of knowledge, understanding and compassion of governments and Australians generally about, and for, the people who gave their lives on the Australian colonial frontier.

Types of memorials
While memorials are often statues or monuments, they can come in many different forms such as avenues, books, films, gardens, graves, paintings, plaques, poetry, roads, song or sites. Some memorials commemorate Aboriginal peoples who inhabited certain places before the arrival of colonists in 1788, but do not honour those who gave their lives in the defence of homelands from 1788 onwards. Examples of types of memorials follow.

Queensland
Forest Refuge: A memorial to Aboriginal people who gave their lives in frontier conflicts around Buderim, Queensland is located in the Buderim Forest Nature Refuge. Links to information about this memorial can be found below under Queensland listings.

Multuggerah Way, Toowoomba is a viaduct named after the famed Aboriginal warrior who fought against and repelled colonists in the area in 1843. Links to information about this memorial can be found below under Queensland listings.

You can read more about Dave Sands at: https://en.wikipedia.org/wiki/Dave_Sands and in the Australian Dictionary of Biography at: https://adb.anu.edu.au/biography/sands-david-dave-11611

William Ferguson: Although also not an Aboriginal warrior on the colonial frontier in the sense that he fought in armed combat against colonists, Aboriginal politician and unionist, William (Bill) Ferguson (1882–1950), worked tirelessly for Aboriginal rights in New South Wales. He also championed the freedom of Aboriginal people from the oppression of the Aboriginal Protection Board from the 1900s until his death in 1950. Read more about him in the Australian Dictionary of Biography at: https://adb.anu.edu.au/biography/ferguson-william-bill-6160. A William Ferguson Memorial Statue, erected at Dubbo, New South Wales, was unveiled on 6 May 2019: NITV Staff Writer, ‘A permanent memorial will honour a tireless campaigner for social justice for Indigenous Australians’, NITV News:
https://www.sbs.com.au/nitv/nitv-news/article/2019/05/06/hometown-unveils-statue-indigenous-rights-activist-william-ferguson#:~:text=A%20bronze%20statue%20of%20Aboriginal%20rights%20
activist%20William,lobbing%20efforts%20led%20by%20his%20descendants%20
and%20supporters.

Monuments honouring explorers and colonists highly controversial
As holding Australia Day on 26 January has become a big issue, in some states, like New South Wales, statues honouring Europeans have become controversial also, even damaged by people who do not believe explorers like Lieutenant (later Captain) James Cook and invading colonists should be honoured. Christoper Knaus and agencies tell more in their story, dated 26 August 2017, ‘”No pride in genocide”: vandals deface Cook statue in Sydney’s Hyde Park’, The Guardian online:
https://www.theguardian.com/australia-news/2017/aug/26/captain-cook-statue-and-two-others-in-sydneys-hyde-park-attacked-by-vandals

In Fremantle, Western Australia, back in 1994, Aboriginal people did not vandalise a highly offensive statue, but added a counter-memorial to it (see Counter-memorial, Fremantle under Western Australia below). While he has decried the vandalism of the Cook statue in Sydney, renowned journalist Stan Grant, among others, has also weighed into the argument, calling for the history of Cook to be corrected: ‘Correct Captain Cook history says Stan Grant’, NITV 22 August 2017. Read more:
https://www.sbs.com.au/nitv/nitv-news/article/2017/08/22/correct-captain-cook-history-says-stan-grant.

The issue of honouring British explorers, like James Cook, and colonists, who from 1788, gradually dispossessed First Nations, continues to be very divisive, often because the majority of Australians know little or nothing about our history. How many know, for example, that First Peoples have been here for millennia–for at least 65,000 years, if not 80,000 years, according to archaeologists? (‘Australian dig finds evidence of Aboriginal habitation up to 80,000 years ago’, Helen Davidson and Calla Wahlquist, The Guardian, 20 July 2017:  https://www.theguardian.com/australia-news/2017/jul/19/dig-finds-evidence-of-aboriginal-habitation-up-to-80000-years-ago) 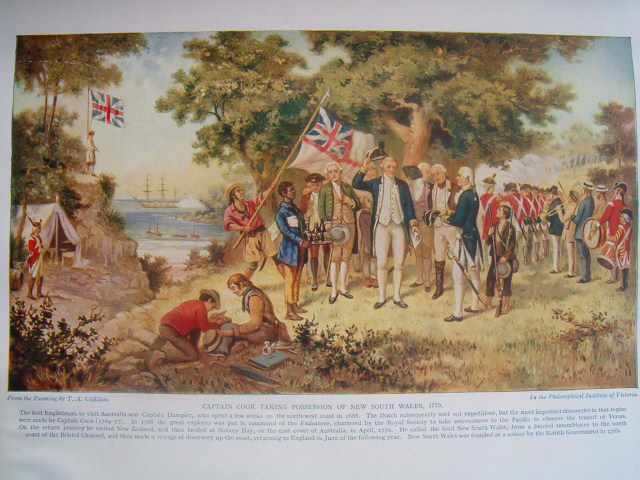 Too few Australians it seems, including politicians, know or even care about whether Australia is really a legitimate nation state under British and international law–there are many hints, for example in the Mabo 2 judgments, that it is not. You can read a lot more about this issue on the Sovereign Union website at: https://nationalunitygovernment.org

Northern Territory
The Gurindji Walk-off at Wave Hill Station in 1966 came about not only because of poor wages and working conditions, but as a result of the killings, maltreatment and massacres of Aboriginal people by pastoralists in the late 19th and early 20th centuries. A book, Yijarni: true stories from Gurindji country, Erika Charola and Felicity Meakins eds, AIATSIS, 2016, tells  stories of these events in Aboriginal languages and in English. Read about the launch of the book in August 2016:
https://www.abc.net.au/news/2016-08-19/the-untold-story-being-the-1966-wave-hill-walk-off/7764524

Victoria
William Cooper: Influential activist and unionist William Cooper was a Yorta Yorta man born on the Murray River, Victoria in 1860. A memorial statue in the Queen’s Gardens, Shepparton, Victoria was dedicated to him on 27 March 2018, 77 years after his death. You can read more about William Cooper himself in Diane Barwick’s entry on him in the Dictionary of Australian Biography:
http://adb.anu.edu.au/biography/cooper-william-5773 and Bain Attwood’s book, William Cooper: An Aboriginal Life Story, The Miegunyah Press, 2021. One of Cooper’s many campaigns was against the government recruiting First Nations people to serve in forces for the British empire that had stolen Aboriginal lands.

Western Australia
Counter-memorial, Fremantle
In 1994, in a ‘counter-memorial’, First Peoples at Fremantle, Western Australia, added their point of view to a controversial, offensive ‘Explorers’ Monument’ that originally commemorated the leader of a punitive expedition at La Grange that killed up to 20 Aboriginal people. Read more about this story, ‘The controversial statue that was added to, not torn down or vandalised’ by Vanessa Mills and Ben Collins, ABC Kimberley, 29 August 2017: https://www.abc.net.au/news/2017-08-29/explorers-monument-added-to-not-torn-down-or-vandalised/8853224

Below are links to websites relating to memorials throughout Australian States and Territories, to some known conflicts between colonists and Australia’s First Peoples. This list, that was first created in 2015, is being expanded as more information becomes available.  Please let us know about any memorials or monuments, already existing or proposed, that are not included in the list below.

This plaque commemorates Aboriginal and Torres Strait Islander veterans of wars in which Australians have participated overseas. There is no national memorial at the Australian War Memorial to First Peoples who died in Australia’s colonial frontier conflicts. You can read more about this plaque and the annual commemorative ceremony for Aboriginal and Torres Strait Islander veterans at: https://www.awm.gov.au/index.php/commemoration/anzac-day/atsivsaa

Related resource: a tool kit, developed in 2021 by the National Indigenous Australians Agency and supported by its North Coast and New England teams, New South Wales”

The New South Wales Government declared the actual site of the massacre, in which at least seven Aboriginal people were killed, as an Aboriginal Place on 27 April 2020 in the lead up to the 184th anniversary of the killings. News and details about the declaration are on the News page under Mount Dispersion recognised as a Declared Aboriginal Place, posted on 4 June 2020.

This installation is also depicted in the cover photo of the Anti-Discrimination Commission Queensland’s publication, Aboriginal people in Queensland: a brief human rights history, 2017:
https://www.qhrc.qld.gov.au/__data/assets/pdf_file/0013/10606/Aboriginal-timeline-FINAL-updated-25-July-2018.pdf

A memorial to Galmarra (Jackey Jackey), companion to Edmund Kennedy on his disastrous 1848 expedition to find a possible site for a northern Queensland port. Link to more information on Monument Australia at: https://monumentaustralia.org.au/themes/people/indigenous/display/90468-jackey-jackey-/photo/1 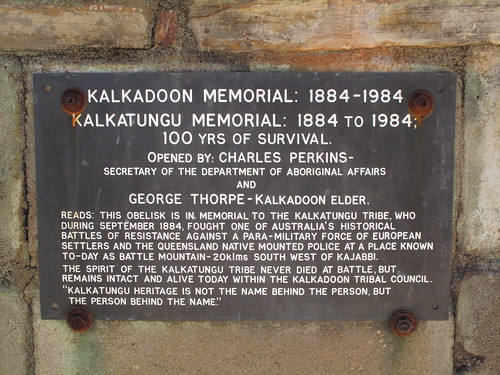 About 200 First Nations people died in this battle with colonists in 1884. Former Secretary of the Australian Department of Aboriginal Affairs, Dr Charles Nelson Perrurle Perkins AO (1936–2000), of Arrernte and Kalkadoon descent, and Kalkadoon Elder George Thorpe, opened the memorial in 1984. 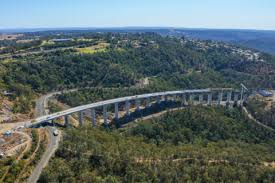 Information about the campaign to name a Toowoomba viaduct Multuggerah Way can be found on the Toowoomba Social Justice Commission’s website. See page on The Friends of Multuggerah and The Battle of Meewah (One Tree Hill): https://www.socialjusticetoowoomba.com/multuggerah-way-campaign

Annual commemorations of the Battle of Meewah (One Tree Hill) have been held in Toowoomba since about 2017, excluding 2020 because of COVID-19 restrictions. (Watch the video of the 2020 Battle of Meewah commemoration ceremony on the Videos page). The 2021 ceremony, with the theme Righting the Wrongs and Truth Telling, was held on 13 September 2021 at Bill Gould’s Lookout, with views across to One Tree Hill (Table Mountain) where Multuggerah led his people against colonists from 12–13 September 1843. Read more about the 2021 ceremony: https://www.toowoombadarlingdowns.com.au/meewah-commemoration/

Truganini is perhaps one of Australia’s most famous Aboriginal people, at one time believed to be the last Tasmanian. Bruny Island, one of the small islands off Tasmania, has a memorial plaque to her. Truganini, Tunnerminnerwait’s wife Planobeena, and Pyterruner, were tried in Melbourne, Victoria in late 1841 as accessories to the murders of two whalers at Cape Paterson, Victoria. They were found not guilty. Tasmanian warriors Tunnerminnerwait and Maulboyhenner were condemned to death for the whalers’ murders and hanged in Melbourne early in the morning of 20 January 1842. In December 2013 Melbourne City Council voted unanimously to erect a memorial in Melbourne to the men, once seen as common criminals rather than as freedom fighters defending their land and the very existence of their culture and nations. In 2016 a memorial to Tunnerminnerwait and Maulboyhenner was designed following consultations with Victorian and Tasmanian Aboriginal communities. One newspaper article summarises their story and how they were not allowed to give evidence in court. Read more:
https://www.smh.com.au/national/once-were-warriors-20140204-31zmu.html

High Street
Orford, VIC
A memorial stone and plaque to Aboriginal people who lost their lives in the Orford area of Victoria. Link here: https://monumentaustralia.org.au/themes/culture/indigenous/display/95448-aboriginal-memorial

The first of its kind in Australia, this Avenue of Honour was opened on 16 July 2021 at the conclusion of NAIDOC Week, the theme for which was “Heal Country”. The memorial provides an opportunity to honour the loss of lives, sacrifice and suffering of First Peoples during frontier conflicts in Australia. Healing Country and Healing People are inseparable. Acknowledgment of the suffering of Aboriginal people is a first step along the road to acceptance of Australia’s history and people working together for a better future for all. 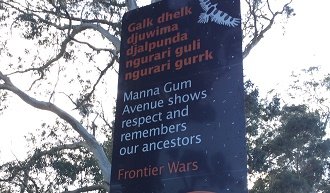 Cnr of Victoria and Franklin Streets
Melbourne
As mentioned above, the Melbourne City Council unanimously voted for a memorial to Tasmanians Maulboyhenner and Tunnerminnerwait. Opened in September 2016, the memorial is a first step in recognising Victoria’s brutal past. Read more at: https://www.theage.com.au/national/victoria/monument-to-aboriginals-1842-execution-first-step-to-recognising-brutal-past-20160911-grdvbx.html

Memorial to those who died around Cocanarup in the early years of colonisation.

Kimberleys, Western Australia
Link here to story about the Sturt Creek massacre and the memorial descendants erected in 2011: https://theconversation.com/oral-testimony-of-an-aboriginal-massacre-now-supported-by-scientific-evidence-85526

Yagan Square that opened in Western Australia’s capital, Perth on 3 March 2018, is already being called ‘the heart of Perth’. A nine-metre tall statue of Yagan honours the famous resistance fighter who defended Noongar lands in the early days of the Swan River colony. The statue was created by Noongar artist, Tjyllyungoo Lance Chadd in collaboration with Trish Robinson and Stuart Green. The work is titled ‘Wirin’–the Noongar word for ‘spirit’ that represents the sacred eternal force of creative power that binds all life on Boodja (Mother Earth). Rangi Hirini’s story about Perth’s new Yagan Square cultural area was aired on NITV News on 22 February 2018, Read more at: https://www.sbs.com.au/nitv/nitv-news/article/2018/02/19/statue-aboriginal-figure-set-permanently-stand-middle-perth