Lorena Allam writes in The Guardian, on 16 March 2022, about a 1981 poisoning of First Nations people at Alice Springs, Northern Territory. Two Aboriginal people died and 14 were admitted to hospital after unwittingly drinking from a poisoned bottle of sherry that was deliberately left near the town’s John Flynn Memorial. 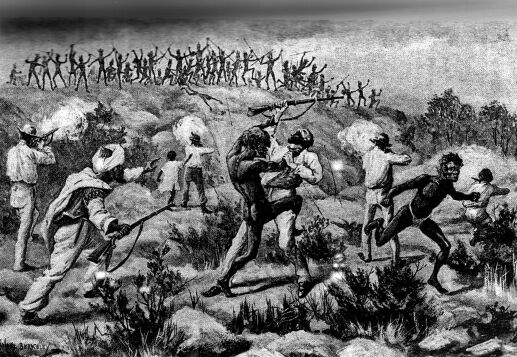 A depiction of a conflict between explorer Ernest Giles’s party and Aboriginal people at Ullaring (in today’s Northern Territory) from Ernest Giles, Australia Twice Traversed: The Romance of Exploration, 1880?, published as an ebook by The University of Adelaide, 17 December 2014

Note: There are official records of, as well as oral and “unofficial” references to, atrocities that were committed during conflicts between colonists and First Nations people in the Northern Territory and throughout Australia, in the 19th and early 20th centuries, as shown on this Australian Frontier Conflicts website under Some Known Conflicts in the Northern Territory: http://: https://australianfrontierconflicts.com.au/timelines/some-known-front…rthern-territory/ ‎. This website includes some incidents up to the 1940s. It is extremely shocking, but not at all surprising to the author of this website, that the incident recorded by Dr Robyn Smith at Alice Springs, took place as recently as 1981.