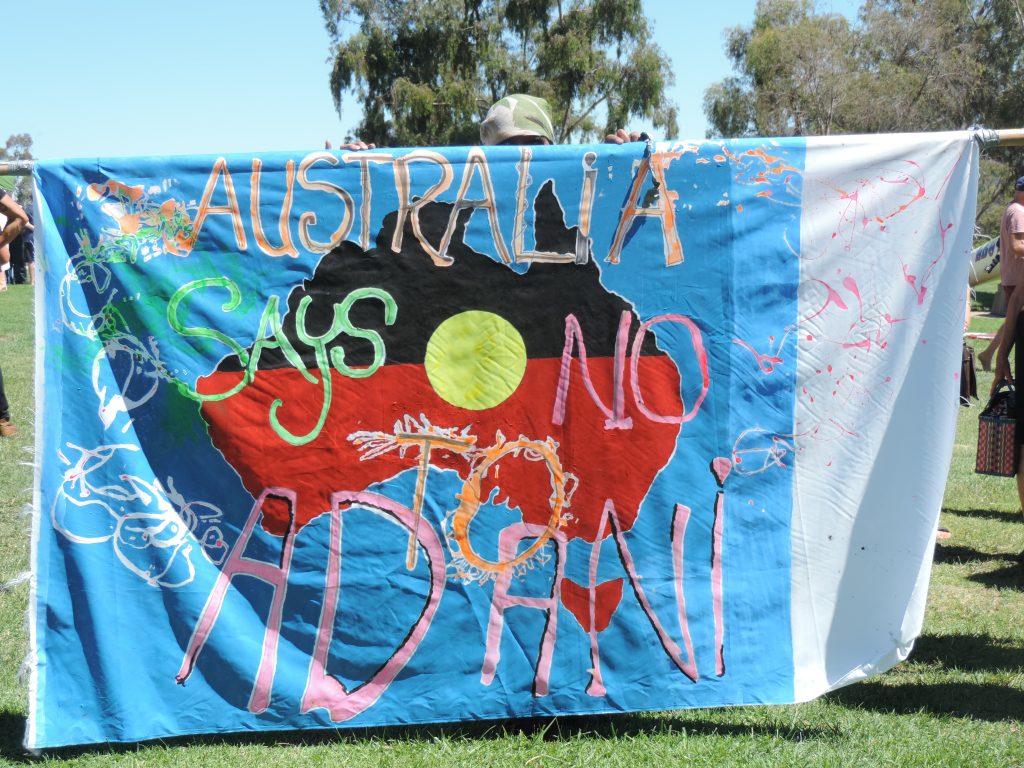 Read the latest news from the Wangan and Jagalingou Traditional Owners Family Council at:

We knew the latest legal battle against Adani was going to be tough.

This dodgy conglomerate is reaching ‘end game’, and has been chafing at the bit to take control of our lands, as we prepare to challenge their sham Indigenous Land Use Agreement (ILUA) in court in March.

The worst part? The Queensland Government could willingly extinguish our native title before we even get our chance to face Adani in court.

And once our native title rights are extinguished, they’re gone forever. Even ifAdani’s sham ILUA is later struck out.

Our application for a full injunction was dismissed last Friday, and we have been in the courts ever since keeping the interim injunction in place while we appeal that decision.

Next Tuesday we are back in the Federal Court, fighting to overturn the rulingand prevent the extinguishment of our native title before the March hearing.

A substantial injustice may be done if we are denied an appeal and the interim injunction is lifted before the trial.

Nothing can hide the facts that Adani has worked to divide our community, overturn our decisions, buy off individuals, split our claim group, and engineer a sham meeting to ‘authorise’ a sham ILUA. And the Queensland Government have aided and abetted them. This deal is illegitimate and should never have gone through.

The Qld Labor Government has the power to do something about this, and it’s time they did!

If we cannot restrain Adani with an injunction, then the Queensland Government must hear loud and clear that our land rights and culture cannot be surrendered for Adani’s profit.

Donate to our Defence of Country fund so we can defend our land against this ruthless corporate giant.

Friends, the deck is stacked and the cards are marked. Both the Government and Adani have been busy behind the scenes setting up the compulsory acquisition and surrender of our lands.

We’ve learned that the Queensland Coordinator General and Adani have been secretly doing deals on land transfers and compulsory acquisition for more than 12 months.

We are the only thing standing between Adani and approval to build the critical infrastructure for its mine of mass destruction — an airport, a fly-in fly-out workers camp, a mine industrial area, coal handling and processing plants, telecommunications and the rail track and water pipeline.

Of course, Adani has no money to set up this industrial colony on our lands and waters. There are still no real jobs or benefits for Aboriginal people. Adani doesn’t have a financier to pay for the mine or rail – so it resorts to all manner of deceit to keep it’s scheme alive.

And until a recent election ‘change of mind’, the Queensland Government has been in on the scheme.

What do we have to do to get some justice? Why are our rights in our lands and waters less important than Adani trying to get rich destroying them?

For us, this campaign has never just been about Adani. It has always been about protecting and conserving our land and culture so we can determine our own path forward for our people. One based on strong respect for our law and culture, the health of our Country, and a resilient community – and clean enterprises and jobs in the new growth industries like solar energy generation.

We value your continued support. Please donate to our Defence of Country fund when you can and carry our simple message by purchasing the “Adani, No Means No” t-shirt.

for the Wangan and Jagalingou Traditional Owners Family Council