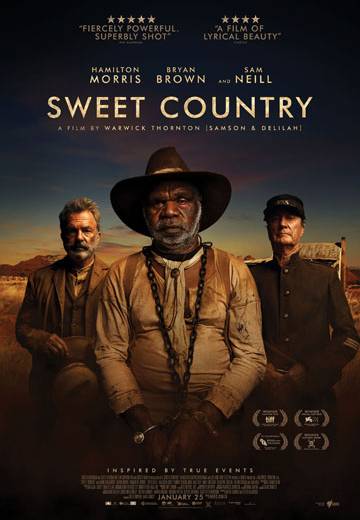 Sweet Country, award-winning director Warwick Thornton’s new feature film, has previewed to proud and excited audiences in Alice Springs, Northern Territory. Highlighting Australia’s Frontier Wars, so far not widely acknowledged, accepted or even known about by ‘mainstream Australia’, the film depicts early 20th–century colonists’ deep fear of Aboriginal resistance, their complete contempt for imposed British law and their often very inhumane treatment of Aboriginal people. Slavery had been abolished in Britain, Russia and the United States more than 70 years previously, but colonial ‘development’ could not have taken place in the Northern Territory and other parts of Australia, without forced Aboriginal labour.

The story of the film is inspired by true events in 1920s Central Australia, when an Aboriginal man, Wilaberta Jack, was arrested and tried for the murder of a European man. In the film, after some terrible events, Aboriginal stockman, Sam Kelly, kills a European station owner, Harry March, in self defence. Sam is hunted down, eventually giving himself up and put on trial, but can he receive a fair one in a system weighted against him, that does not take account of Aboriginal law that has existed for millennia? More about the Alice Springs preview is at: https://www.abc.net.au/news/2018-01-21/cast-and-crew-get-a-preview-of-celebrated-movie-sweet-country/9343588

For a review of the film on Filmlink, go to https://www.filmink.com.au/reviews/sweet-country/

Sweet Country opens nationally on 25 January 2018, the day before ‘Australia Day’–Invasion Day, Survival Day and the Day of Mourning for the majority of Aboriginal and Torres Strait Islander peoples and their supporters. The film is sure to generate much more discussion on the subject of Changing the Date of Australia Day and about the truth of Australian history, of which many Australians are totally ignorant. View a trailer for Sweet Country on YouTube here:
https://www.youtube.com/watch?v=sYKBG1znk4A&feature=youtu.be