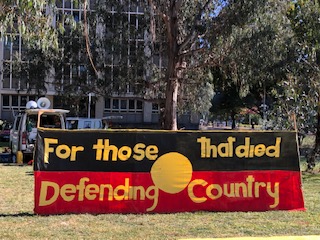 Dr Wareham is also a board member of the International Campaign to Abolish Nuclear Weapons, the winner of a Nobel Peace Prize in 2017 and founded in Melbourne, Australia in 2007. There is strong international support for the Treaty on the Prohibition of Nuclear Weapons (TPNW) that came into force on 22 January 2021. Among the TPNW campaigners are Kokatha Elder from Ceduna, South Australia, Sue Coleman-Haseldine (ICAN Ambassadsor) and her grand-daughter, Kokatha woman, Mia Haseldine and Yankunytjatjata-Anangu woman Karina Lester (ICAN Ambassador), daughter of the late Yami Lester.

The Australian government also sent observers, headed by the Federal Member for Macquarie, Susan Templeman MP, to the first meeting of States Parties to the treaty, held in Vienna, Austria from 21–23 June 2022. Read more about Australian involvement in the Vienna meeting and the many reasons for it here: https://www.icanw.org/australia/