Anzac Day: Freedom means Australia should face up to the truth of its past–Richard Flanagan reflects on the meaning of Anzac Day

Anzac Day: Freedom means Australia should face up to the truth of its past–Richard Flanagan reflects on the meaning of Anzac Day 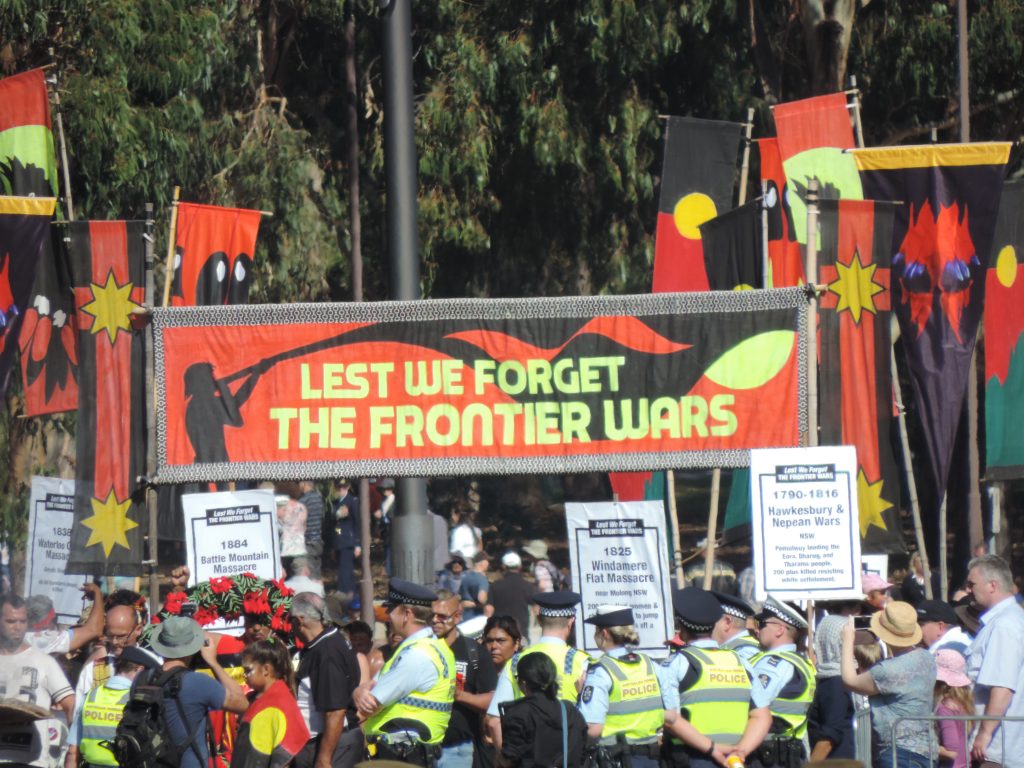 If Anzac Day is about Australian servicemen and women fighting in overseas wars to protect our freedom, then Australia needs to face up to the truth of its history and accept what happened in the past before we can move forward towards shared Sovereignty.

The aftermath of this bloodbath is still with us. Judging by the racist remarks (unrepeatable here), that the author of this website heard an attendee utter today during the National Anzac Day Ceremony, we are a very long way from Australians even knowing about, or understanding, what happened on Australia’s killing fields from 1788 up to he 1940s.

Speaking at the National Press Club, Canberra, on 18 April 2018, Man Booker Prize Winner Richard Flanagan reflected on Anzac Day, Australia’s First Peoples, what happened in colonial Australia and why Australians need to face up to the truth of our history. Below (in italics) are edited excerpts from Richard Flanagan’s speech that refer to the frontier wars:

… We could ask why–if we were actually genuine about remembering patriots who have died for this country–why would we not first spend $100m on a museum honouring the at least 65,000 estimated Indigenous dead who so tragically lost their lives defending their country here in Australia in the frontier wars of the 19th century? Why is there nowhere in Australia telling the stories of the massacres, the dispossession, and the courageous resistance of these patriots?

The figure of 65,000, I should add, is one arrived at by two academics at the University of Queensland and applies only to Indigenous deaths in that State. If their methodology is correct, the numbers for the Indigenous fallen nationally must be extraordinarily large.

As one prominent commentator noted, “Individually and collectively, it was sacrifice on a stupendous scale. We should be a nation of memory, the commentator went on, not just of memorials, for these are our foundation stories. They should be as important to us as the ride of Paul Revere, or the last stand of King Harold at Hastings, or the incarceration of Nelson Mandela might be to others.”

The prominent commentator was Tony Abbott, announcing the French museum, speaking of the dead of world war one.

And yet how can his argument be said not to also hold for the Indigenous dead? After all, Sir John Monash became the great military leader he was in spite of considerable prejudice. And so too Pemulwuy and Jundamurra.

Of course, such a reasonable and necessary proposal as a museum for the Indigenous fallen would at first be greeted with ridicule and contempt. Because in the deepest, most fundamental way we are not free of the colonial past. Freedom exists in the shadow of memory. For Australia to find out what freedom means, it has to face up to the truth of its past. And it’s time we decided to accept what we are and where we come from, because only in that truth can we finally be free as a people.

Sixty years ago, the scientific consensus was that Indigenous Australians had been in Australia for only 6,000 years. But through a series of breath-taking discoveries, science has confirmed what Indigenous people always knew: that they have been here for at least 60,000 years.

It makes you wonder if the $500 million earmarked for renovating the Australian War Memorial would not be more wisely spent on a world class national Indigenous museum that honours a past unparalleled in human history? Surely, you might think, when we have the oldest continuous civilisation on Earth, is not such a major institution central to our understanding of ourselves as a people? Is it not necessary, and fundamental to us as a nation?

It is, after all, extraordinary, and beyond a disgrace that there is in the 21st century no museum telling that extraordinary story, so that all Australians might know it, so that the world might share in it, and so that we might learn something of the struggle and achievement, the culture and unique civilisations that were and are Indigenous Australia.

We have turned our back on this profound truth again and again, because to acknowledge it is also to acknowledge the other great truth of Australia: that the prosperity of contemporary Australia was built on the destruction of countless Indigenous lives [up to the present day], and with them dreamings, songlines, languages, alternative ways of comprehending not only our extraordinary country but the very cosmos.

And yet, if we were to have the courage and largeness to acknowledge as a nation both truths about our past, we would discover a third truth, an extraordinary and liberating truth for all Australians’ future, about who we are and where we might go.

We would discover that though this land and its people were colonised, a 60,000-year-old civilisation is not so easily snuffed out. And the new people who came to Australia, in their dealings with Black Australia, were also indigenised, and, in the mash up, Indigenous values of land, of country, of time, of family, of space and story, became strong also among non-Indigenous Australians. Indigenous ways, forms, understandings permeated our mentality in everything from Australian rules football to our sense of humour.

As much as there was a process of colonisation, there was also a history of indigenisation–a frequently repressed, often violent process in which a white underclass took on many black ways of living and sometimes, more fundamentally, thinking and feeling, in which may be traced continuities that extend back into deep time.

If we were to pursue this idea, we would discover that we are not Europeans nor are we Asians. That we are not a new country. We are in the first instance a society that begins in deep time. That is the bedrock of our civilisation as Australians, our birthright, and if we would accept it, rather than spurn it, we might discover so many new possibilities for ourselves as a people.

My own island is a good example of both processes. There took place there what was described, not by a contemporary left-wing academic, but an 1830s Van Diemonian attorney-general, as “a war of extermination” of the Tasmanian Aborigines. A terrible war of which fewer than 100 people survived, the forebears of today’s 25,000-strong Palawa population.

To this day Tasmanian society is shaped by the tragedy of a land where the English, as a ship’s captain’s wife, Rosalie O’Hare, confided in her diary in 1828, “consider the massacre of these people an honour”.

But it was, for a critical time, also a land where many ex-convicts, to quote a contemporary witness, “dress in kangaroo skins without linen and wear sandals made of seal skins. They smell like foxes.” They live in “bark huts like the natives, not cultivating anything, but living entirely on kangaroos, emus, and small porcupines”. In coming to understand how to live in this strange new world, they took on Aboriginal partners, friends, ways of life and thinking.

No less an authority than John West, the first official editor of the Sydney Morning Herald, wrote in 1856 that Van Diemonians living outside of the two major settlements “had a way of life somewhat resembling that of the Aborigines”.

The bush became freedom, and for a time the Van Diemonian authorities feared a jacquerie in which the ex-convicts would make common cause with the Aboriginal population.

It was a messy, often brutal, inescapably human response to extraordinary times and places, out of which emerged a new people. It was a revolution of sense and sensibilities so extraordinary it is even now hard to fully compass its liberating dimensions …

If this history is frequently terrible, it is also finally a history of hope for us all. For it shows we are not dispossessed Europeans, but a muddy wash of peoples made anew in the meeting of a pre-industrial, pre-modern European culture with a remarkable Indigenous culture and an extraordinary natural world George Orwell once said that the hardest thing to see is what is in front of your face. This is what is in front of ours.

We became our own people, not a poor imitation of elsewhere.

We pretend that our national identity is a fixed, frozen thing, but Australia is a molten idea. We have only begun to think of ourselves as Australians within living memory. There was no legal concept of an Australian citizen until 1948. Twenty years later, the Australian population was still divided into three official categories by the ABS in its official year book: British: born in Australia; British: born overseas, and foreign. Indigenous Australia wasn’t even recorded as a general category.

Indigenous Australia has, after great thought and wide discussion, asked that it be heard, and that this take the form of an advisory body to parliament–a body that would be recognised in the constitution.

“What a gift this is that we give you,” Galarrwuy Yunupingu has said, “if you choose to accept us in a meaningful way.”

The gift we are being offered is vast; the patrimony of 60,000 years, and with it the possibilities for the future that it opens up to us. We can choose to have our beginning and our centre in Indigenous culture. Or we can choose to walk away, into a misty world of lies and evasions, pregnant with the possibility of future catastrophe.

But the gift needs honouring in what Yunupingu calls a “meaningful way”. It needs honouring with institutions, with monuments, with this profound history being made central in our account of ourselves and, above all, with what the Indigenous people have asked for repeatedly: constitutional recognition.

In truth, we can no longer go forward without addressing this matter. We cannot hope to be a republic if this is not at the republic’s core, because otherwise we are only repeating the error of the colonialists and the federationists before us.

At a moment when democracy is imperilled around the world we are being offered, with the Uluru statement, the chance to complete our democracy, to make it stronger, more inclusive, and more robust.

And we would be foolish to turn that offer down.

That saying the things that I have said today might be deemed unreasonable, or shrill, or farfetched, should remind us all of how intolerable the situation remains in this country for Indigenous people, how unbearable it must be for Indigenous people to know that their patrimony, their 60-millennia-old culture, which they are willing to share, which has shaped and continues to shape much of what is best in us as a people, will, however, continue to be treated as marginal, and they, again, humiliated.

Even if you have no respect for Indigenous Australia, you should care for the future of your country. And now, more than ever, we need ways of bringing us together, not, as, for example, Australia Day presently does, by dividing us. We need a large and open vision sustained in truth, not myths that encourages dangerous illusions.

I know these are large ideas. But perhaps they are the ideas for these times. None of these things are easy. None would be arrived at quickly.

You can watch and listen to the whole of Richard Flanagan’s National Press Club 58-minute speech at: https://www.youtube.com/watch?v=4cAeVk2-LAA