Today, 29 April 2020, is 250 years since Captain James Cook and crew from HMS Endeavour landed at Kundal, known in English as Kurnell, on Botany Bay, Sydney, New South Wales, Australia. But Aboriginal leaders are contesting what was said on Cook’s landing at Kundal. According to the diary of Sydney Parkinson, a young artist on the Endeavour, local Aboriginal men yelled ‘warra warra wai’ as they made threatening gestures with spears towards Cook and his party. Parkinson interpreted the words and gestures as ‘go away’. But for 250 years the Aboriginal view of the encounter has not been heard. The First People believed that they had seen ghosts coming ashore and that the visiting party were all dead people. Today you can read that view in the story by Isabella Higgins and Sarah Collard on ABC News online at: 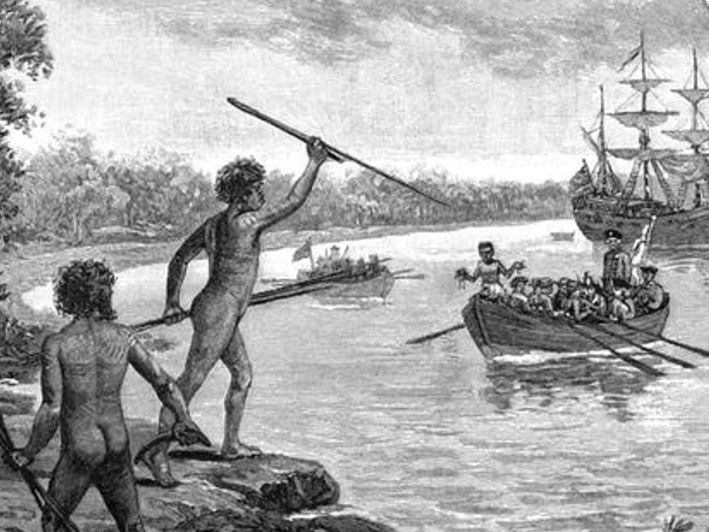 A sketch depicting the scene as Cook and his party prepare to land at Kundal, 29 April 2020. (Wikimedia). The landing place is known in English as Kurnell, Botany Bay, New South Wales.

Misunderstanding between the British and First Peoples and a portent of what was to come began that very day on 29 April 1770. Cook’s journal 250 years ago today in 1770 records:

Sunday 29th In the PM winds southerly and clear weather with which we stood into the bay and Anchor’d under the South shoreabout 2 Mile within the entrence in 6 fathoms water, the south point bearing SE          and the north point ^East, Saw as we came in on both points of the bay Several of the natives and afew hutts, Men women and children on the south shore abreast of the Ship to which place I went in the boats in hopes of speaking with them accompaned by Mr Banks Dr Solander and Tupia- as we approached the shore they all made off except two Men who seem’d resolved to oppose our landing – as soon as I saw this I orderd the boats to lay upon their oars in order to speake to them but this was to little purpose for neither us nor Tupia could understand one word they said.   we then threw them some nails beeds &Caa shore which they took up and seem’d not ill pleased with in so much that I thout that they beckon’d to us to come a shore but in this we were mistaken for as soon as we put the boat in they again came to oppose us    upon which I fired a musket between the two which had no other effect than to make them retire back where bundles of thier darts lay and one of them took up a stone and threw at us which caused my fireing a second Musquet load with small shott and altho’ some of the shott struck the man yet it had no other effect than to make him lay hold of a ^Shield or target ^to defend himself   emmediatly after this we landed which we had no sooner done than they throw’d two darts at us  this obliged me to fire a third shott soon after which they both made off, but not in such haste but what we might have taken one, but MrBanks being of opinion that the darts were poisoned made me cautious how I advanced into the woods – We found here a few Small hutts made of the bark of trees in one of which were four or five small children with whome we left some strings of beeds &Ca    a quantity of darts lay about the hutts these we took away with us – three Canoes lay upon the bea[c]h the worst I think I ever saw   they were about 1012 or 14 feet long made of one peice of the bark of a tree drawn or tied up at each end and the middle kept open by means of peices of sticks by way of Thwarts —

After searching for fresh water without success except a little in a small hole dug in the sand, we embarqued and went over to the north point of the bay were in coming in we saw several people   but when we landed now there were no body to be seen – we found here some fresh water which came trinkling down and stood in pools among the rocks: but as this was troblesome to come at I sent a party of men a shore in the morning to the place where we first landed to dig holes in the sand by which means and a small stream they found fresh water sufficient to water the ship – the strings of beeds &Ca we had left with the children last night were found laying in the hut this morning probably the natives were afraid to take them away – after breakfast we sent some empty casks a shore and a party of men to cut wood and I went my self in the Pinnace to sound and explore the Bay – in the doing of which I saw severl of the natives but they all fled at my approach – I landed in two places one of which the people had but just left as there were small fires and fresh muscles broiling upon them – here likewise lay vast heaps of the largest oyster shells I ever saw. I likewise saw of the oysters themselves as I rowed over ths shoals but being highwater I could not get any having nothing we me to take them up

From the National Library of Australia’s website at: http://southseas.nla.gov.au/journals/cook/17700429.html

Nearly 18 years were to pass for the Eora after this first encounter with the white ‘ghosts’ of people they believed were dead. It was a way of explaining a phenomenon they had never seen before–a sailing ship, a party of some pale-skinned people wearing clothes and an islander, the Maori master mariner Tupaia, whose language they did not understand, nor he theirs.

Unfortunately, once the colony of New South Wales had been established with the arrival of the First Fleet on 26 January 1788, the truth about the newcomers’ motives was all too obvious. They had come to stay on First People’s sovereign territory. Inevitable conflicts ensued, despite attempts at conciliation by Aboriginal leaders and the efforts of various colonists. Individual killings on both sides and military-sanctioned massacres of First Peoples occurred. Aboriginal weapons in the end were to be no match for British firepower and the brutal reality of the thirst of the invaders for land and resources.